‘Falling of the Gavel’: Court Weighing Whether Real Estate Auction Sales Are Final 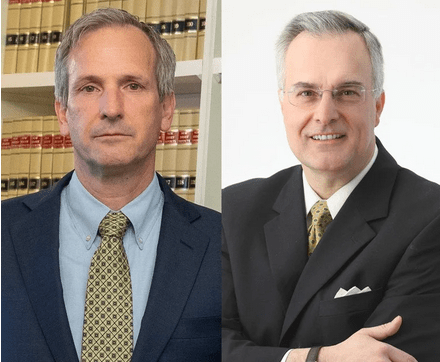 Though the state Supreme Court has yet to schedule oral arguments, the case has the attention of the real estate industry.

The case Sullivan v. Max Spann Real Estate & Auction that’s pending before the New Jersey Supreme Court poses the question of whether an auction sale contract should contain a three-day attorney-review provision like other sales contracts.

The court also is weighing whether the attorney-review requirement is applicable to contracts prepared by licensed realtors.

Two legal heavyweights are set to square off before the justices on the matter. Peter Verniero, a partner at Newark-based Sills Cummis & Gross and former associate justice, is representing brokerage firm Max Spann. Randall Peach, a principal at Woolson Anderson Peach in Somerville, is representing the auction buyer Mengxi Liu, who appealed the Appellate Division ruling that sent the case to the high court.

Though the state Supreme Court has yet to schedule oral arguments, the case has the attention of the real estate industry.

Verniero predicts that if the court rules “yes” on attorney reviews, auction sales would be fundamentally altered, with the finality traditionally associated with a gavel coming down rendered meaningless.

Nonsense, counters Peach, who has maintained that the contract his client signed should be voided since it was prepared by a licensed real estate agent without the requisite attorney-review provision.

In a Nov. 13, 2020, decision, the Appellate Division affirmed a trial court’s finding that the three-day attorney-review clause mandated in 1983’s N.J. State Bar Ass’n v. N.J. Ass’n of Realtor Bds. does not apply to an auction sale.

A dissent by Judge Jose Fuentes enabled an appeal as of right to the New Jersey Supreme Court to clarify the issue.

Buyer Liu completed a bidder registration form documenting the sale that was not subject to the three-day attorney-review period. Liu instead received a blank template of the sales contract.

The purchase was to be an “all cash” deal, and Liu presented herself as having “sufficient cash to consummate” the transaction, according to court documents.

After Liu could not close title due to lack of financing, Peach said Max Spann held another auction and sold the property to another buyer for $825,000, but retained Liu’s escrow deposit.

Liu argued the sales contract was void ab initio for failing to include a three-day attorney-review provision.

The trial court found Liu breached the contract and divided the deposit between plaintiff Sullivan and defendant Max Spann.

The trial judge found the auction process was not in contravention of N.J.A.C. 11:5-6.2(g) and that Liu was bound by the sales contract. The judge also determined that the liquidated damages provision in the sales contract was enforceable.

In other words, Firko and Whipple said a private real estate auction sale was not the consumer-type contract contemplated in N.J. State Bar Ass’n, and, therefore, the three-day attorney-review period is not required in such a sale.

In dissenting Fuentes contended that the state Supreme Court’s 1983 decision did not expressly except auction contracts from the three-day review mandate. Fuentes believed that the panel was obligated to enforce that mandate, leaving discretion to the justices to alter the court’s prior decision if it chooses. Fuentes further maintained that the failure to include the attorney-review language made the contract void.

In a 34-page brief filed on behalf of Max Spann dated Aug. 6, Verniero predicted the case would have an industrywide impact.

“In sum, there can be little doubt that engrafting a three-day attorney review period after the fall of the auctioneer’s gavel would transform the auction form of sale, both as a matter of practice and as a legal construct,” Verniero wrote.

“Rather than form a legally binding agreement at the auction’s close, the auction merely would result in a contingent arrangement in which an agreement might be formed, depending on the outcome of some subsequent review process,” Verniero stated.

That is a total misrepresentation of the facts, contends Peach, who claims Max Spann had one of its sales agents prepare the sales contract that contained no attorney-review clause and used it to pressure Liu into buying the property.

“The impact of the case is that our Supreme Court will have the opportunity to reiterate that the court ‘meant it’ when it held in 1983 that licensed realtors could not prepare a sales contract unless the three-day attorney-review language was included, and that the court will not permit realtors to engage in the unauthorized practice of law,” said Peach in a phone call.

Peach said the 1983 holding was the approval of a consent judgment between the New Jersey Bar Association and the Realtor Boards.

“It is vitally important to understand that this case has nothing to do with applying attorney review to auctions,” Peach added. “This is a fundamental misconception. To be clear, we are not asking for the attorney-review period to be applied to auctions generally.”

“Rather,” he said, “we are asking the court to apply its clear 1983 holding, and thus void a transaction where a licensed realtor unlawfully prepared a sales contract without including the required attorney-review language.”

Peach is relying on the published 1994 Appellate Division opinion in Bassford v. Trico Mortgage, where the panel recognized that auctions can be conducted so that a licensed realtor is not the one preparing or filling out the contract.

“In Bassford, the seller prepared the contract, which made attorney review inapplicable,” Peach said. “Thus, it has been known since 1994 that it is entirely possible to conduct auctions in a way that does not involve having a licensed realtor violate the law by preparing a sales contract without including attorney review.”

As far as an impact on real estate law?

“The answer is ‘none,’” Peach said. “There will be no impact, because, as Bassford demonstrates, it is very easy to conduct an auction without triggering attorney review—simply by not having a licensed agent fill out the contract.

“Anyone is free to buy and sell real estate by any means—private sale, auction etc.—without attorney review, so long as the sales contract is not ‘prepared,’ including filling in blanks, by a licensed realtor,” Peach said.

Peach maintains that the attorney-review requirement only applies to contracts prepared by licensed realtors.

“In other words, auctions are already ‘exempted’ from attorney review, to the extent realtors are not used to prepare the contract,” Peach said.

Verniero contends Liu was a sophisticated buyer who worked with her husband as “a team” and knew exactly what she was doing when she signed the contract.

“There is no reasonable suggestion that such convulsive change to the auction method of sales is what this Court had intended in State Bar Ass’n,” wrote Verniero in the Aug. 6 brief. “We urge the Court to eschew that result here.”

Verniero said both the trial court and Appellate Division made the right call.

“Applying the three-day attorney review period to auction sales would upend the auction form of sale,” Verniero said. “Further, it is not necessary to protect bidders who are supplied the real estate contract and afforded the opportunity for attorney review before an auction commences.

“Max Spann asks this Court to affirm the decisions below and to apply its holding to this case,” Verniero added. “The Appellate Division correctly described the deleterious impact of Appellant’s position if it applied to auction sales.”