Rare Mughal era spectacles to be auctioned by Sotheby’s 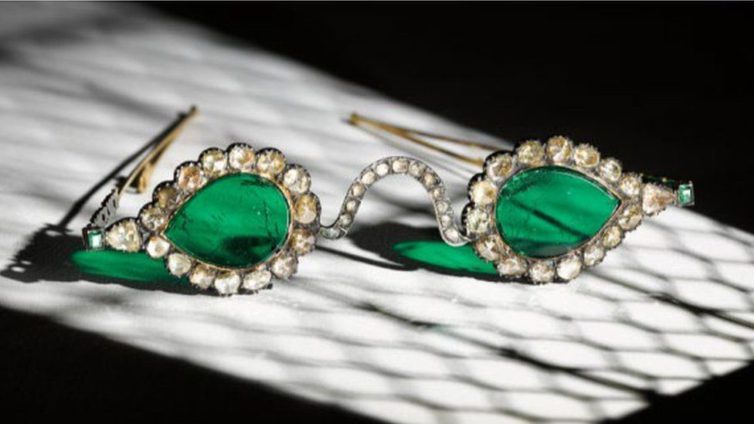 A pair of rare diamond and emerald spectacles from an unknown Indian princely treasury will be sold at an auction in London later this month.

The lenses were placed in the Mughal-era frames around 1890, according to auction house Sotheby’s.

Ahead of the sale, they will be exhibited in October for the first time in Hong Kong and London.

“These extraordinary curiosities bring together myriad threads – from the technical mastery of the cutter and the genius of craftsmanship to the vision of a patron who chose to fashion two pairs of glasses quite unlike anything ever seen before,” Edward Gibbs, chairman of Sotheby’s for Middle East and India, said.

It is unclear who commissioned these spectacles, but they possibly belong to Mughals, the dynasty that ruled the subcontinent in the 16th and 17th centuries and was known for rich artistic and architectural achievements.

A statement by Sotheby’s said that a diamond and an emerald were shaped into the two spectacles.

“The quality and purity of the gemstones is extraordinary and stones of this size would no doubt have been the reserve of an emperor,” it added.

“While ordinary lenses merely function to improve sight, these filters were aids for spiritual enlightenment – with diamonds thought to illuminate and emeralds believed to have held miraculous powers to heal and to ward off evil,” Sotheby’s said.

According to the auction house, the “most famous evocation” of such glasses in history and mythology can be found in Pliny the Elder’s “Natural History”, which recounts the ancient Roman Emperor Nero observing gladiatorial contests through the surface of a precious green stone.

Nero’s tutor, Seneca, was an expert in light refraction, mirrors, and optics, and those were thought to be one of the first-ever spectacles, the statement said.