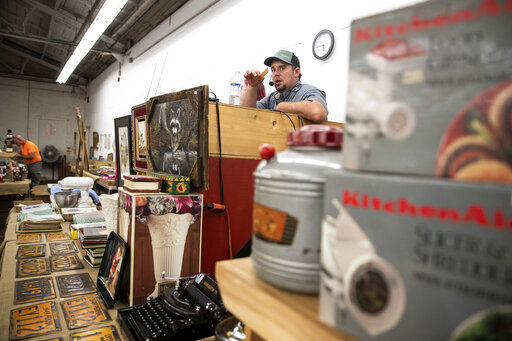 The auctioneer sat by a chainsaw and a painting of a raccoon, scanning the crowd for familiar faces, buyers he knew couldn’t pass up old postcards or dusty books about long-forgotten places.

At 5 p.m. — sharp — he opened his mouth and began to chant, the sound bursting from his throat like a fingerpicking banjo player blazing through “Foggy Mountain Breakdown.” The blur of words and numbers came far too fast for any newcomer to make out, but the auctioneer’s song is really a subtle lullaby, meant to lull, some say hypnotize, those buyers into a slight nod or thumb raise, to spend a few dollars more on a roll of chicken wire or a box of nails.

“Here’s an example of what I’m saying — ‘$5 now, $10, will you give me $10’— just much faster,” Brian Oberholtzer said after Monday’s afternoon’s antique auction. “It’s all about repetition and rhythm. They call it your cadence, or a chant.”

And there’s no better auctioneer in Pennsylvania than Oberholtzer.

In May, after several past top-10 finishes, Oberholtzer, 36, won the Pennsylvania Auctioneers Association’s (PAA) statewide bid-calling competition in Harrisburg. He’s one of nearly 2,000 licensed auctioneers and apprentices in the state, and the judging, said PAA president Matthew Hostetter, looks at a wide range of skills, from poise to voice clarity, to connection with the crowd.

“You really have to be the total package,” Hostetter said.

Pennsylvania, Ohio, and Indiana have the most auctioneers in the United States, on account of deep agricultural traditions there. Auctioneers in Pennsylvania sell everything from cars, to hogs, to whole farms. There’s a “handful” of women who are members of the PAA, and Kylee Hostetter, Matt’s sister, finished in third place in this year’s competition…. Read Full Article | https://www.bedfordgazette.com/ap/state/pennsylvania-auctioneer-explains-mysteries-of-an-old-trade/article_71d9a933-6f35-5512-91fe-a706f13189e7.html