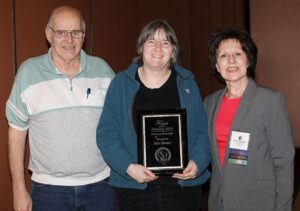 Bauer worked with the auction companies for more than 30 years in her role with The Country Today, starting by typing the advertisement copy that came in handwritten from the companies.

“I eventually started working with the auction companies directly by answering their questions, scheduling their ads and sending them their proofs,” Bauer said.

Over the years, Bauer represented The Country Today at WAA’s annual convention, handing out papers and advertising information, along with answering questions about the newspaper.

“Attending the convention was a great way to get to know the people behind the phone call or emails. Many times, I also worked with the auctioneer’s office staff, which are a great group of people to work with,” she said.

Bauer said through her work, she learned a lot about the auction industry.

“No one really knows how hard they work until you learn more about how they go about getting and holding sales, having to organize items for the sale and trying to get the best price for their clients,” she said.

Receiving the award was a special shock for Bauer, who said after leaving The Country Today in 2018 she wasn’t sure if she would ever get to attend the convention again.

“When I received the call from Beaner Stockwell that they had nominated me for the award, I was shocked. It wasn’t something that ever occurred to me that I would receive,” she said. “The auctioneers and their families are a great bunch of people to get to know. They are a fun group and although in a sense competitors, they also seem to get along and help each other out and encourage people to begin in the industry.”

Bob Sweeney Memorial is to honor a “friend of the industry,” who cannot be a WAA member or auctioneer. The fund was established when Phil Majerus donated $2500 for this purpose.

Senators Dale Schultz and Brian Rude received “Friend of the Industry” Awards in 1996 and 1998 respectively.