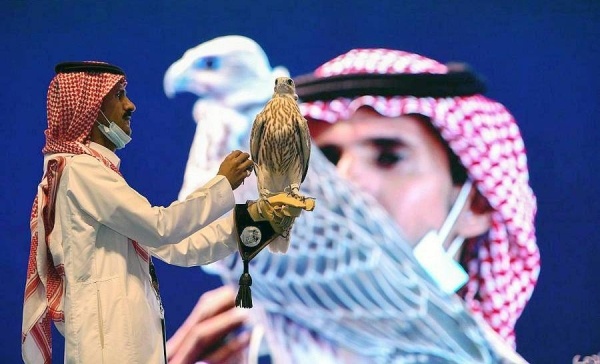 RIYADH — The International Falcon Breeders Auction (IFBA) has witnessed a historical event when a rare falcon was sold at a record SR270,000, during the second night of the direct auction held at the Saudi Falcons Club (SFC) in Malham, North of Riyadh, in which the most expensive falcon bred by Saudi breeders was auctioned, it was reported Sunday.

The falcon, bred at Al-Aradi’s Farm in the Kingdom of Saudi Arabia, has seen intense competition on the occasion. It weighs 1105 grams, is 17 and a half inches long, and 16 and three quarters inches wide.

The auction, which took place Saturday, was awarded to the Saudi falconer Moteb Munir Al-Ayafi for SR270,000, who revealed that he will call it “Raghwan,” and that he aims to participate in (Al-Mazayen competitions for local breeding) “falcon beauty pageant”, which gives the owner of the most beautiful falcon a prize of SR300,000.

Al-Ayafi said that he inherited the profession of falconry from his family, adding that he has won championships in Horse Beauty contests, and seeks to compete in the 4th edition of King Abdulaziz Falconry Festival, which is the largest event of its kind and has set a world record in the Guinness World Records twice in a row…. Read Full Article | https://saudigazette.com.sa/article/609599/SAUDI-ARABIA/Rare-falcon-sold-at-record-price-in-direct-auction